Remember the famous movie "Pretty Woman" with Richard Gere and Julia Roberts. I think many of us remember the business lunch episode in the restaurant, where one of the lead characters in the movie is confronted for the first time in her life with the concept of dining etiquette, and is completely confused about the different knifes and forks and when and how to use them. Remember her bewilderment when a dish she had not even finishes was removed from the table. No matter how it was funny in the movie, in reality, not everyone would like to be in this situation being totally unfamiliar with the culture of table manners and a certain symbolic language in a formal setting.

At home, the rules of table etiquette are very rarely observed in modern times. One can afford to relax at home, but it is difficult to get away without table manners in a restaurant.

Knowledge of the rules of table etiquette, as well as compliance with the multiple devices to a particular dish, helps one to feel calm at a reception or dinner party. In most cases, behavior at the table has some general requirements.

The history of table culture goes back some 2500 years ago. The first mention of a food culture can be found in scrolls relating to Ancient Egypt. Also on vases and on paintings of temple walls, once can find references to its beginnings.

Ancient Greece and Rome were famous for their huge feasts, which were some of blossoming of table culture and rules for serving meals. 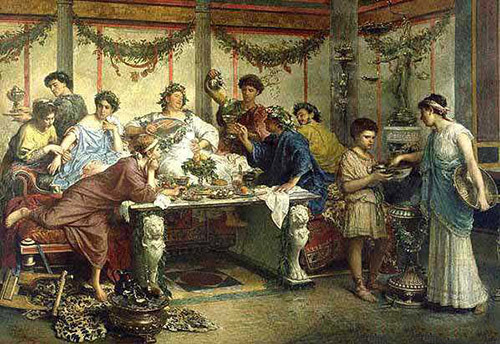 It is noteworthy that at that time, Europe was not at all familiar with such things as etiquette and table setting. They did not even real tableware and utensils, and just put the food in a special recess on the tables.

A new era for the heyday of the culture of food consumption goes back to the 8th – 9th century during the reign of Charlemagne. Feasts turned into entire ceremonies, dictated by certain rules. However, they still mainly ate with a knife, as a spoon was the privilege of the rulers. 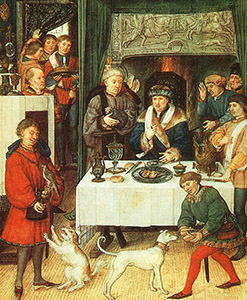 In most countries, it was customary to eat with hands, grabbing the food with three fingers, until the 16th century.

The Italians were the first to use cutlery (knife and fork), as before they only used a fork during the cooking process and for putting food on plates.

In Europe, the use of cutlery is often associated with significant changes in fashion (high collars, lush frills, wide long sleeves and cuffs). Eating with hands had become very uncomfortable.

Over the course of the centuries there have been many changes in the table etiquette and table setting. Tableware changed, new and extra cutlery as well as table decoration elements were introduced. 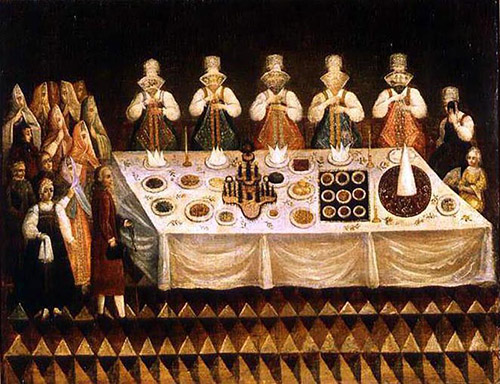 New manners appeared. Perhaps, over time, there will be other innovations, which our descendants will have to follow strictly. One can say only one thing: regardless of the time, table etiquette will be an indication of good upbringing and education and will be appreciated around the world.

Dining etiquette was developed over the course of many centuries, and its aim was to make sitting at the table a pleasant pastime, and to make the behavior of all participants harmonious, rational, and not bothering others. One cannot talk about high cultural development and education of a person if he eats sloppy or does not know and does not observe the rules of conduct at the table.

Etiquette is not an abstraction, it is not overkill, it is not snobbery. Etiquette " is the language of mutual respect understood by all" (Jack Nicholson).

Each item has its specific place and purpose. The following rules should be followed:

2. A second and consequent rule is that it is considered inappropriate and even unacceptable to shift the knife or fork from one hand to the other during the meal.

3. One should also not pick up the utensils and put them differently, especially before the meal has started.

4. Do not worry if you see a decorated table with a huge range of forks, knives and spoons. The principle is simple: start your meal with the cutlery that is the furthest from the plate. Usually meals are served in the order in which the utensils are located on the table. The main dish should normally be eaten with the cutlery located the closest to the plate.

5. Always used the cutlery on the plate with a common dish, and never use the individual cutlery.

6. If during the course of the meal, a utensil accidentally drops onto the floor, never pick it up. Instead, ask the waiter to bring you some clean tools.

7. Always hold the utensils at the end, and never in the middle.

8. When you take the knife with your right hand, the forefinger has to be on the handle and not on the back of the blade. Under no condition should one use the knife to eat with; it should only be used to cut food into small pieces on a platter.

9. It is advisable not to cut all the food into smaller bites at once. Cut one piece at a time and put it immediately to your mouth. While you chew your food, you can cut the next piece.

10. Bring the spoon or fork to your mouth, but do not tilt your head to the plate. The utensil is held parallel to the table and is brought to the side of the mouth. If the French-style spoon has an elongated narrow scoop, then the spoon should be brought to the mouth with the pointed end.

11. A spoon shall not be filled with soup till its rim, and according to the etiquette it is not accepted to blow on a spoonful of soup if you think it is too hot.

12. A bowl of soup can only be tilted away to scoop up the last bits of soup. Also the movement of the spoon should be away from oneself. 13. When you finish your meal, put the utensils parallel with the handles to the right. In northern America, the teeth of the fork should be upwards; in Europe the teeth should be down. 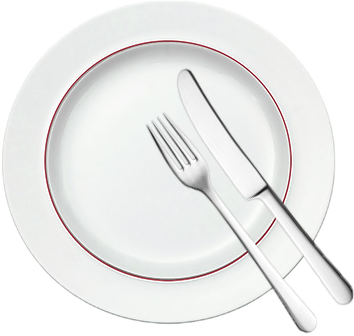 14. If you make a pause during the course of the meal, for example to pick up a glass, and you want to continue using the utensils afterwards, you should not put them on the plate, but on the table next to the plate or on the side of the plate.

15. If you wish the dish to be repeated, put the cutlery in a cross with the fork on top and its teeth upwards. 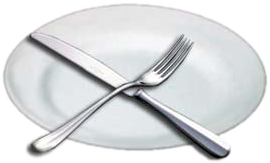 16. If you are in a hurry and expect to receive the next dish immediately, put the knife horizontally with the handle to the right and the fork on top in a vertical position. 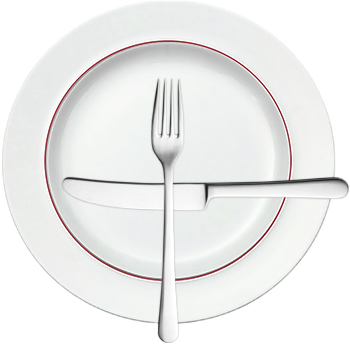 17. If you appreciated the dish very much and wish to thank the cook, put the knife and fork horizontally across the plate with the handles to the left. 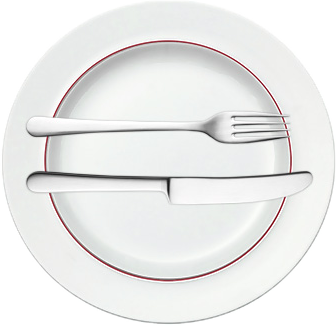 18. To show that the food was not according to your taste, you can put the knife through the tines of the fork and cross the utensils. 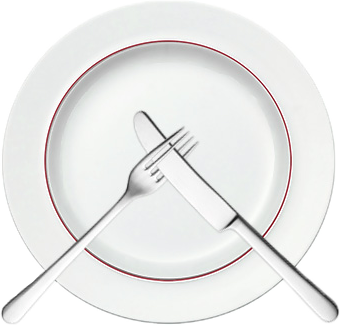 19. If you want a half-eaten dish to be taken away, cross the cutlery by putting the fork under the knife with the tines down. This means that you did not like the dish and you do not want to continue eating it.

20. If you want to make a pause, cross your cutlery and put the fork on top of the knife with the tines down. This will be a signal to the waiter not to remove the plate from the table.

21. In case you did not like the service of the staff, there is also a special arrangement for the cutlery after the meal. Put the knife and fork handles up and cross them in such a way that the blade of the knife covers the scoop of the fork. 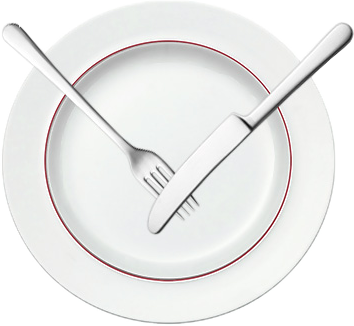 22. If you want the complaints book to be brought, put the cutlery vertically in a parallel position with the handles up along the edges of the plates. 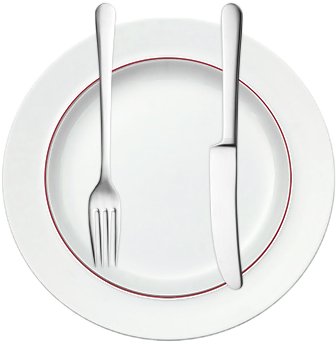 23. If you liked the service, the food, and the speed, courtesy, politeness and smiling of the waiters, then you can show this by crossing the cutlery and putting the knife blade between the last tines of the fork. This way, you tell non-verbally that you become a regular customer to the place. 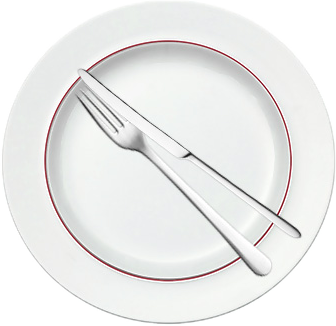 We tried to define only the basic rules for using cutlery. Proper handling of all utensils facilitates the process of eating, so take these simple rules into account. Sometimes, a lack of knowledge of etiquette can put a person in an awkward position.